Public sector pay will be frozen next year – but nurses, doctors and the lowest-paid will still get a rise, Rishi Sunak said yesterday.

The Chancellor said he could not justify a ‘significant, across-the-board’ hike for the public sector given the difficulties faced by private firms.

Many businesses, particularly in retail and hospitality, have been devastated by the virus and lockdowns – while public sector workers have been largely protected from job losses and pay cuts.

Mr Sunak revealed that in the six months to September, private sector wages fell by nearly 1 per cent year-on-year, while public sector wages were up nearly 4 per cent. 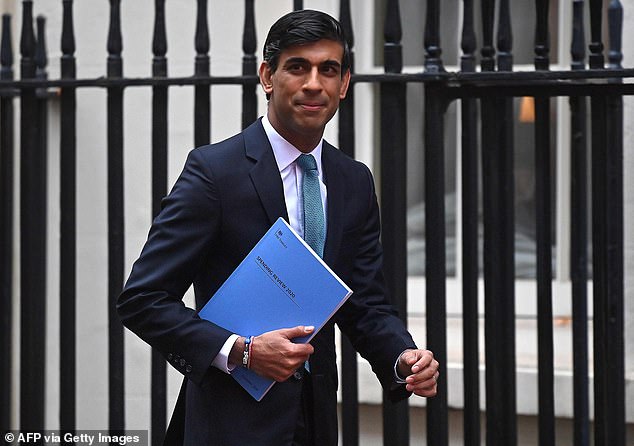 Rishi Sunak said yesterday that he could not justify a ‘significant, across-the-board’ hike for the public sector

As a result, the Chancellor said he would ‘pause’ pay rises for many in the public sector, with the move likely to affect police officers, teachers and civil servants.

However, NHS workers including nurses and doctors and the lowest-paid will receive an increase.

‘In such a difficult context for the private sector, especially for those people working in sectors like retail, hospitality and leisure, I cannot justify a significant across-the-board pay increase for all public sector workers.

‘Instead, we are targeting our resources at those who need it most.’

Setting out his plans in detail, Mr Sunak said more than a million NHS workers would receive a rise.

Also, another two million public sector workers who receive less than the median salary of £24,000 – about 38 per cent of the total number – would gain by at least £250.

Together, this means that more than half of public sector workers overall will see their pay go up.

Despite this, the announcement yesterday triggered a furious backlash from unions and opposition MPs.

The Police Federation said that the pay freeze was an insult to rank-and-file officers who had been on the front line in the fight against so-called Covidiots who disregard curfews.

Its national chairman, John Apter, said: ‘After years of austerity and a real terms pay cut of 18 per cent, today’s news will be a kick in the teeth for police officers.

This year my colleagues have been on the front line in the battle against Covid-19, protecting the public and putting their own safety and the safety of their families at risk.’

She told the Commons: ‘Earlier this year the Chancellor stood on his doorstep and clapped for key workers. 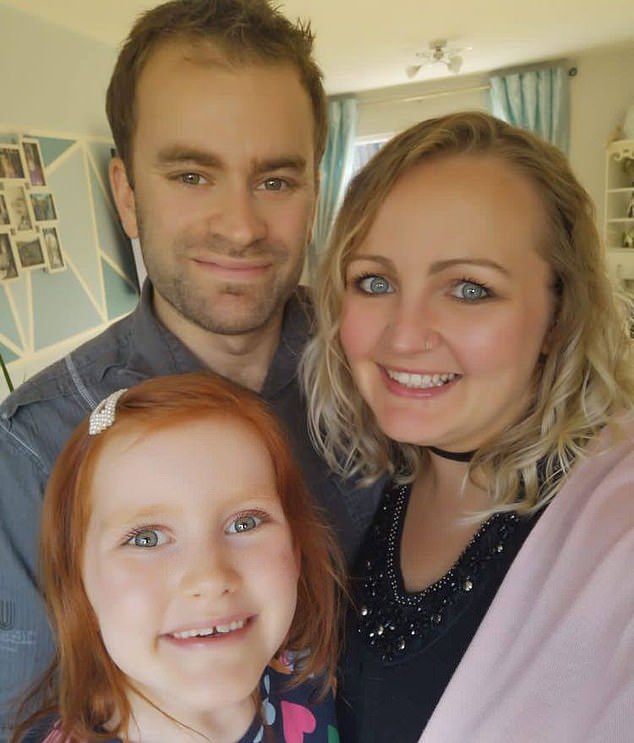 Sian Nightingale, 33, (pictured with husband Craig and their daughter Sophia) was pleased to learn she would be getting a pay rise 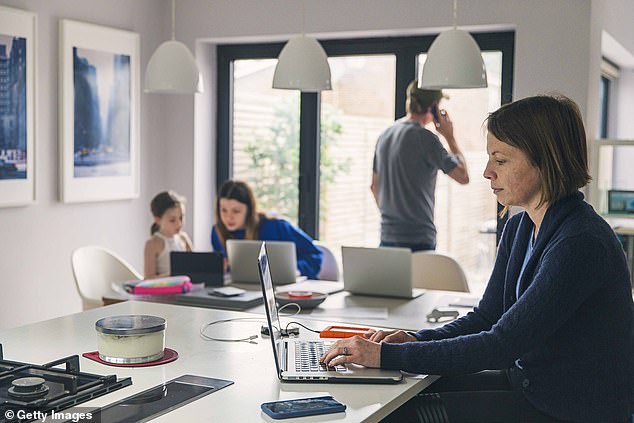 The Chancellor announced more than two million of the lowest-paid workers will receive a £345 pay rise next year. (Stock image)

‘Today his Government institutes a pay freeze for many of them. This takes a sledgehammer to consumer confidence.’

Former Labour leader Jeremy Corbyn suggested civil servants should receive a 10 per cent pay increase, but Mr Sunak said he did not recognise his numbers.

The Unite union said the deal was a ‘body blow’ to public sector workers and accused the Chancellor of ‘divide and rule’ tactics.

Rehana Azam, national officer of the GMB union, said the freeze would ‘hit key workers who have risked everything during the pandemic’.

The FDA union, which represents civil servants, said that the announcement was a ‘return to austerity’.

Millions of low paid get a 19p an hour rise

More than two million of the lowest-paid workers will receive a £345 pay rise next year after the Chancellor increased the national living wage.

It will also be extended to 23 and 24-year-olds for the first time.

‘Taken together, these minimum wage increases will likely benefit around two million people.’

The Low Pay Commission had proposed a figure of £9.21 an hour but adjusted it in line with average earnings as the pandemic took hold.

Chairman Bryan Sanderson said: ‘There are strong arguments concerning both low-paid workers, many performing critically important tasks, and the very real solvency risks to which small businesses are currently exposed.

‘We have opted for a prudent increase which consolidates the considerable progress of recent years and provides a base from which we can move towards the Government’s target over the next few years.’

Tom Waters of the Institute for Fiscal Studies said: ‘Clearly the current environment – when many employers are struggling to even stay open – isn’t a suitable one for big increases in minimum wages, so raising the national living wage in line with average earnings seems sensible.

‘But the Government still wants to get the NLW to two-thirds of average pay by 2024. Treading water this year implies faster increases in the following three years if the target is to be met.’ Trades Union Congress general secretary Frances O’Grady accused the Government of letting low-paid workers down.

‘Workers expecting a national minimum wage increase have been let down by the Government’s decision to row back on the full rise they were promised,’ she said.

General secretary of the shopworkers’ union Usdaw, Paddy Lillis, said: ‘The increase of 19p to £8.91 an hour doesn’t meet the union’s call for £10 per hour, the real living wage rate of £9.50 or even the Government’s previously projected rate of £9.21.’ 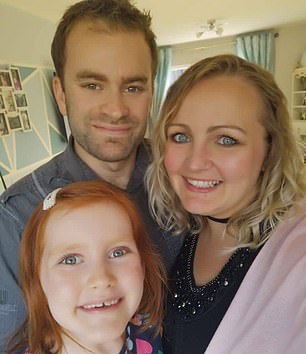 Part-time administrator Sian Nightingale was pleased to learn she would be getting a pay rise.

The 33-year-old said it would help to pay for childcare after a difficult year for her and her husband.

As a ‘Band Two’ administrator for the NHS, the maximum Mrs Nightingale can earn is £19,300 – well under the £24,000 threshold for low-paid public sector workers who will receive a pay rise under plans announced by the Chancellor.

Her husband Craig works in a brewery and is on furlough for the second time this year.

Mrs Nightingale, from Nottingham, said the extra cash would go towards their seven-year-old daughter Sophia.

‘It’ll help to pay towards her many, many hobbies,’ she said. ‘Also the cost of childcare is just ridiculous.’

She said the pay rise was welcome after the uncertainty of the past nine months, adding: ‘It’s been difficult, but it’s been a godsend that I do work for the NHS because at least I’ve got some job security.’

But Mrs Nightingale, who had a low-paid job in banking for six years, said Rishi Sunak could have gone further to boost incomes in the public and private sectors.

She said: ‘I don’t think it’s fair. I’ve worked in the private sector as well and I remember feeling quite sore that everyone else’s pay in the public sector was going up and mine was just stagnating, so I think it would be quite frustrating.’

The surge in home working is costing the Treasury billions of pounds in takings.

With fewer people commuting or taking business trips, the Government is missing out on major sources of tax revenue.

The Exchequer is also facing a £25million bill due to a little-known tax perk for home workers – with an estimated 5.5 million now eligible compared with 6,000 last year, according to HM Revenue and Customs. 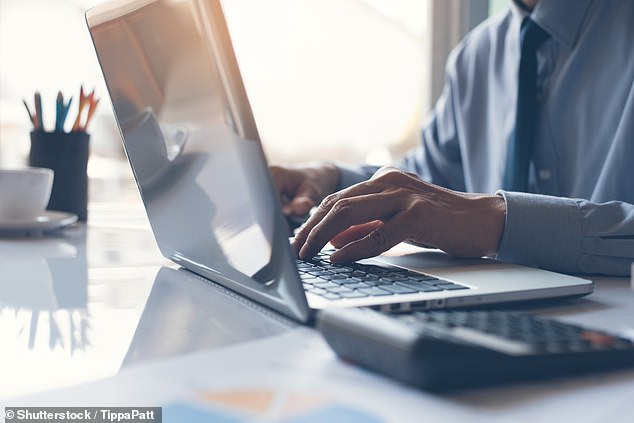 The Government is missing out on major sources of tax revenue as more people work from home. (Stock image)

But with more people drinking at home during lockdown, the Treasury is set to rake in an extra £1.1billion in alcohol duty.

Sarah Coles, personal finance analyst at investment firm Hargreaves Lansdown, said: ‘The most recent government statistics show 40 per cent of people are currently working from home, which means a massive drop in commuting, and a subsequent fall in fuel duty.

‘And with so much business travel becoming nigh-on impossible, not only are we using less fuel, we’re flying less too.

‘Business travellers are responsible for a significant chunk of business and first-class travel attracts a higher rate of air passenger duty. So it has played its part in a 90 per cent drop in air passenger duty this year.’

Tom Selby, senior analyst at AJ Bell, added: ‘Having the vast majority of the country working at home for much of the year has played havoc with the Treasury’s tax receipts.’

The Treasury is now forecast to make just £21.8billion in fuel duty over the current tax year ending in April 2021 – down from £27.6 billion in the previous tax year.

Air passenger duty is only expected to be £500million compared with £3.7billion the previous year.

The allowance entitles employees to tax relief on up to £6 a week to help cover costs such higher heating bills. It is worth up to £62.40 a year for basic-rate taxpayers and £124.80 for higher earners.

Because the relief is only available for those who have been told to work from home – rather than those who choose to – the cost to the Treasury was previously expected to be negligible.

But claims have rocketed and since launching a new online claims service in October, the taxman said it had received around 1.2million applications.

One silver lining for the Treasury was the extra alcohol duty it was expected to take in this year, with total receipts now predicted to hit £12.9billion.

Ms Coles added: ‘The rise in alcohol duty confirmed what we all secretly suspected, that an awful lot of people were taking the edge off the stress and boredom of lockdown by increasing their alcohol consumption.

As a nation, we drank so much that we managed to more than offset the fact we were buying cheaper alcohol in supermarkets instead of paying pub and restaurant prices.’