Rishi Sunak has developed a flinty side. Unveiling his spending review yesterday, he displayed a grave, gritty mien.

Previous Sunak speeches have been sadder affairs – all puppy-dog eyes and regretful delivery. But this time he coarsened his voice and stiffened his brow. He seemed older, weightier, more substantial. High office has hardened him.

There will be some who titter at his Instagram influencer habit. Those tight-as-a-tick suits, that Treasury hoodie (what was he thinking?) It’s possible he may be a little presidential for some Parliamentary palates. But to most people watching yesterday, I suspect, here stood a Prime Minister-in-waiting. The Boy Wonder had become a man. 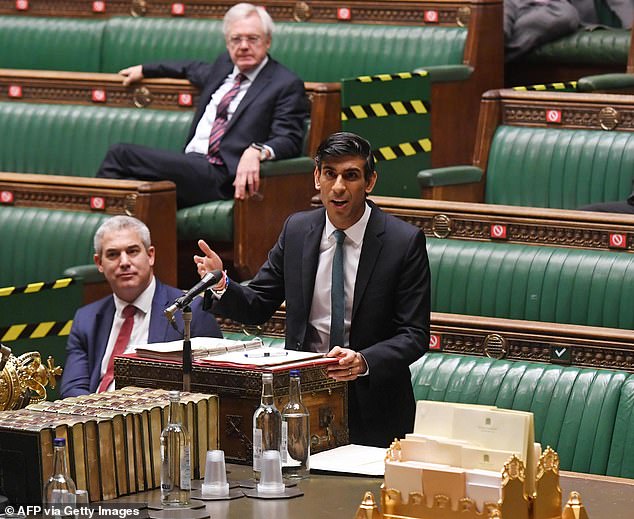 It was noticeable just how much Rishi had ballooned stature-wise before the session even started. He arrived after another pointless PMQs, swanning around the front bench, one hand nonchalantly in pocket, a wave here, a ‘how ya doin’?’ there.

Gone was that nervy creature I witnessed in March waiting to give his first Budget. His hands were shaking so much back then he could have knocked up a round of pina coladas. The tone of yesterday’s speech was set from the off. While the health crisis caused by coronavirus ‘is not yet over’, he said, ‘our economic emergency has only just begun’.

Terrifying numbers poured from his mouth. Our total spending tackling the virus? A trifling £280billion. The Chancellor took his time announcing his figures, allowing them to percolate around the House like trails of lethal mustard gas. If he intended them to stun, then mission accomplished. 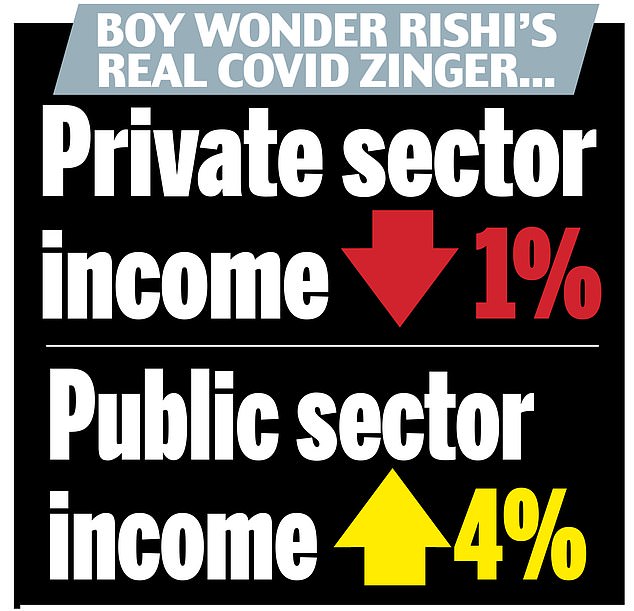 We heard a well-constructed argument about the need for a public sector pay freeze. Apparently, workers in the private sector this year had seen their income drop on average by one per cent, while those working for the State had experienced a healthy four per cent hike 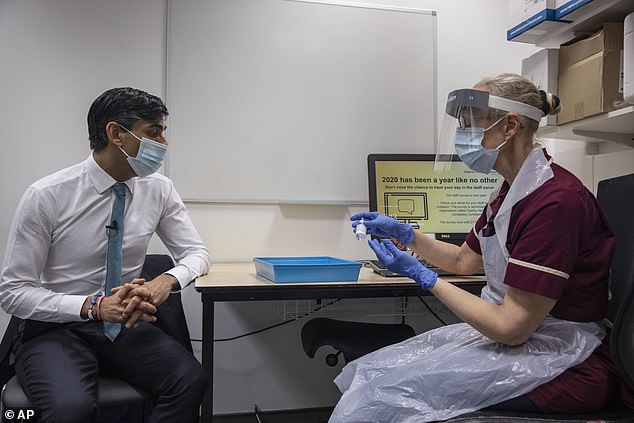 We were told borrowing this year would reach a dizzying £394billion. Yowzers! As Rishi said it, a wide grimace spread across a clerk’s face. When he announced unemployment was expected to reach 7.5 per cent next June, Labour’s Sir Keir Starmer blew out an agonised puff of the cheeks.

Here was the cold reality of our situation in all its chilling detail. Yet the man at the Despatch Box was not sugar-coating anything. Gone were those warm pledges about not leaving anyone behind. We’d all dined out on tick for the past nine months and now here we were being presented with the eye-popping bill. Tough choice followed tough choice.

We heard a well-constructed argument about the need for a public sector pay freeze. Apparently, workers in the private sector this year had seen their income drop on average by one per cent, while those working for the State had experienced a healthy four per cent hike. That statistic surprised me. Suspect it was supposed to.

Here was a coherent justification people could actually understand. Unlike Gordon Brown or Philip Hammond, there are never any confusing sleights of hand in Rishi’s presentation. When the inevitable cut to the international development budget was announced you could practically hear daggers being sharpened around the chamber. The Chancellor explained that sticking rigidly to our annual pledge of 0.7 per cent of GDP at this time was ‘difficult to justify to British people’. The old charity begins at home argument. Doubt you’d have heard too many grumbles on the ‘Red Wall’ of northern Tory seats at that.

Not so the Opposition benches. ‘Shameful!’ cried one. ‘Terrible!’ By breaking the Conservative manifesto pledge, Sunak had taken a risk. But then who has ever made it to No10 without risking their popularity?

After the pain came the wallet-throbbing splurge. A further £55billion in spending promises. How was it all going to be paid for? That, my friends, is another daunting day’s work. This was a spending review not a Budget. The dreaded ‘tax’ word went unmentioned. There was a fascinating flourish towards the end in which Sunak advised that, whatever financial help the Government offered, it must come secondary to the ‘courage, wisdom, kindness and creativity it unleashes’.

As he spoke, he tilted his head to each side of the House, making sure his words carried the appropriate weight, adding: ‘These cannot be mandated or distributed by the Government. They must come from each of us and be shared freely because the future – this better country – is common endeavour.’ Usually when chancellors rise to the Despatch Box they deliver a dreary company report, occasionally with a bit of self-congratulatory grandstanding.

Yet here Rishi was spelling out his political convictions. It was dramatic – as though the dry bean-counter at a FTSE 100 company had suddenly leapt to his feet during the AGM and announced to shareholders: ‘Let’s do this all differently!’

What was Boris thinking, watching it all on telly in Downing Street? One thing’s for sure: Rishi’s twirl will not have gone unnoticed. Anneliese Dodds responded for Labour. A flustered bag of nerves as usual. It seems astonishing considering her lack of penetration this year that Starmer has not replaced her. Then again, perhaps he feels none of his other top team would fare any better against the Chancellor. However terrifying our economic predicament, they still all look like little skiffs in his slipstream.