The U.S.-funded United Nations is providing cash to help job-seeking migrants trek up through South America, Central America, and Mexico, says Todd Bensman at the Center for Immigration Studies.

“It is definitely organized,” Bensman told Breitbart News on Monday during a reporting trip to Tapachula in southern Mexico, where migrants arrive after crossing Central America:

They’re giving money out at way-stations up and down the [migrant] trail … There’s a process [in Tapachula]: You get your Mexican [visa] papers, then you go to the UN building next door, get an appointment, and they interview you and look at your situation…  It’s not big money, and not all of them get it, but enough get it to sustain them so they don’t have to go home, and so they can go on to the next way station.

Bensman tweeted a video of the migrants waiting for payments:

Photo I just took of a Honduran migrant woman’s United Nations-issued cash card, which provided 2,500 pesos a month for 4,
the max in this one city of Tapachula, Mexico. All part of the UN “cash-based interventions” program I wrote about last month here: https://t.co/ocDcwnnAL7 pic.twitter.com/9l5F2sjevz

The funding helps poor migrants from Africa and Asia survive the deadly and brutal trek through South American, over the Darien Gap, through Central America, and into Mexico. Without the UN-provided money, many of the migrants risk going without food, shelter, or short-distance transport.

This US-bound Haitian in Tapachula, Mexico complains that the UN failed to make its January payment to him and now his UN debit card is empty… pic.twitter.com/32N3IpKhTB

The taxpayer-funded UN also funds migrant families as they rationally make their way towards U.S. jobs, neighborhoods, and K-12 schools:

At the United Nations office in Tapachula, Haitian immigrants wait in lines to apply for cash assistance. These ones feel as though Colombians and Venezuelans are edging them out for the $ but they’re game to keep trying! pic.twitter.com/VIhT7pHtwr

The migrants can walk thousands of miles on their treks, guided by advice from the migrants’ cellphone-carried network. This migrant is  more than halfway through his hoped-for 5,000-mile trek from Venezuala to Las Vegas:

A Venezuelan in southern Mexico describes his route pic.twitter.com/gQclXCJOqS

In Mexico, the migrants need to register with Mexico’s government before they can apply for the UN cash:

A sea of African migrants outside the Mexican COMAR immigration offices to get papers in Tapachula, Mexico near the Guatemala border. Later@they will try for UN cash debit cards. They are Senegalese, Nigerians, Angolans and Ghanians. They tell me so@e Somalis are here pic.twitter.com/8BVsgPfWeN

The migrants are rational and want to work, said Bensman. They know that President Joe Biden’s pro-migration border chief — Alejandro Mayorkas — is quietly allowing catch-and-release for many, although not all, of the global migrants who arrive at the U.S. border.

Once released in the United States, the migrants can take jobs to pay their huge debts to smugglers — and also to encourage more of their families and friends to make the deadly trip, Bensman said, adding:

It’s very simple: if there is a high chance your smuggling investment will yield a return — meaning you get in and work, legally or not, — you’ll come. If  [U.S. government officials] lower that chance, then you won’t come …. It’s not much more complicated than that.

The sea of Africans this morning outside Mexican immigration here in Tapachula, Mexico. pic.twitter.com/pGoieO2te0

President Donald Trump stopped the flood because he ensured that new migrants were sent home with unpaid smuggling debts. For example, migrants from Nigeria must pay a minimum of $5,000 to get into South America, not counting all their other survival costs, he said. “That’s lifetime-sized fortune,” for some, he added.

But Biden’s deputies admitted roughly 1.5 million legal and illegal migrants in 2021 as they try to reinflate the cheap-labor bubble that has helped business investors since the bip[atisan 1990 immigration-expansion act.

In December, Bensman described his examination of the UN’s funding system in an article for TheFederalist.com:

The public reporting as to how much the United States, through the State Department, gives IOM and how many got it is opaque at best. President Joe Biden’s 2022 budget calls for $10 billion in humanitarian assistance “to support vulnerable people abroad.” But there’s no detailed breakout.

A Fiscal Year 2019 summary (starting page 37) by the State Department’s Bureau of Population, Refugees, and Migration (PRM), which provides U.S. funding to the IOM and many other United Nations agencies, offers one clue of the pre-expansion levels. IOM spent more than $60 million in 2019 for activities in the northern part of South America, Central America, and Mexico during the so-called “caravan migrant crisis” earlier that year, the fiscal year report said.

State Department-funneled money helped IOM provide 29,000 people in the Western Hemisphere with cash and voucher assistance and supported 75 shelter waystations, the State Department report states on page 42, much like the one I visited in Reynosa. Along the northern border of Mexico in July 2019, at the height of a “caravan” crisis, the IOM provided 600 beds and essential items to the Mexican government and helped it expand existing shelters and build new ones to accommodate the “asylum seekers.”

The migrants are rational as they try to leap from their poor, crowded, corrupt, and backward home countries into the efficient and wealthy United States.

But Americans are also rational in excluding waves of migrants from swamping their labor markets, housing markets, schools, and ballots.

Migration moves money, and since at least 1990, the federal government has tried to extract people from poor countries so they can serve U.S. investors as cheap workers, government-aided consumers, and high-density renters in the U.S. economy. 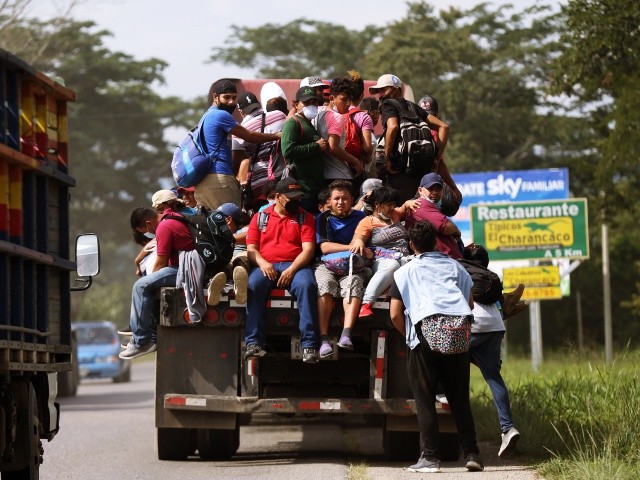 Truckers serve as transportation for the migrants who go in the caravan, facilitating their arrival at the Honduran border with Guatemala and thus being able to reach the United States on January 14, 2021 in San Pedro Sula, Honduras. (Milo Espinoza/Getty Images)

That economic strategy has no stopping point, and it is harmful to ordinary Americans: It cuts their career opportunities and their wages while it also raises their housing costs.

The strategy also curbs Americans’ productivity, shrinks their political clout, and widens the regional wealth gaps between the Democrats’ coastal states and the GOP’s heartland states.

Unsurprisingly, a wide variety of little-publicized polls do show deep and broad opposition to labor migration and the inflow of temporary contract workers into jobs sought by young U.S. graduates.

The opposition is growing, anti-establishment, multiracial, cross-sex, non-racist, class-based, bipartisan, rational, persistent, and recognizes the solidarity that Americans owe to each other.

#Buffalo has long had a poverty problem. One of the worst in the nation. It hasn’t improved under @MayorByronBrown. #wny #newyork #niagara. https://t.co/Mtew5xkcff pic.twitter.com/TXS1JwjObL