On March 6th, 2020 I published Oil Stocks Should Continue to Be Avoided which turned out to be well-timed. A quote from my book Resources Rock (Insomniac Press, 2004) seems apt:

“The good news is that because the energy sector does go through such short cycles, then even when it is in a downward spiral, it’s usually not long before it pulls out of the slump. That’s when there’s a lot of opportunities to pump up the volume of your investment in the industry”

Oil and Gas is a Cyclical Business

The ideal time to buy a cyclical business is when things look their worst, and we’re at that point now for oil and gas. Although the US energy companies (those with stronger balance sheets that will survive the pandemic) are looking attractive now from a mid to longer term perspective (this is not an overnight trade) there is a unique opportunity for American investors to profit handsomely in Canadian energy companies.

The reason is the unique relationship between oil prices and the Canadian currency. 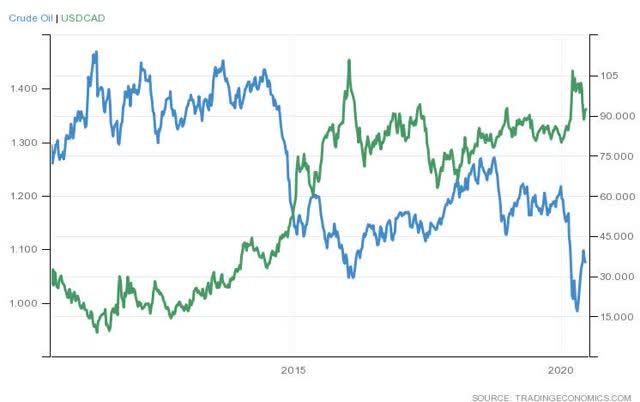 As you can tell from the graph, the Canadian dollar is stronger at higher oil prices, and weakens considerably (as is the case today) against the USD when oil prices fall. This shouldn’t be surprising, since Canada mineral fuel accounts for 22% of its total exports.

It’s no secret that oil demand has been demolished by the novel coronavirus and coincident recession, but in my experience the best indicator of supply adjusting to the downside is activity in the oil patch. In May, the Energy Information Administration reported the fewest oil and natural gas drilling rigs on record working in the United States.

The time to buy into oil and gas companies is when production cuts are underway and the major suppliers are working in tandem to stabilize the supply/demand balance.

In August of 2009 Suncor (SU) merged with PetroCanada to become the largest integrated producer in Canada. During the 1st quarter the company lost $0.20 per share on an operating basis versus $0.77 per share earnings the year before (net loss reported was $2.31 per common share which included a number of non‑cash after‑tax asset impairment and other charges). However cash flow was $0.91 compared to $0.98 in the 1st quarter of 2019. The company pays a dividend of $0.31 per share. Its 52 week price range on the Toronto Stock Exchange is $45.12 – $14.02 and it’s currently trading just above $24.

The second largest energy company (and the largest ‘independent’) in Canada is Canadian Natural Resources (CNQ). The company reported a loss of $1.08 (versus a profit of $0.80 last year) per share for the 1st quarter, and cash flow of $1.13 (versus $1.86). Their results also included charges such as product inventory re-valuation. The dividend was actually increased to $0.425 per share – a refreshing departure from so many other industry players who’ve cut their dividends. Fund flows from operations also covered their capital expenditures. The 52-week range for the stock price is $42.57 – $9.80 and trades near $24 on the TSX.

I’ve been involved in the investment management business in Canada for nearly 40 years and have witnessed the same pattern of Americans investing in the Canadian energy sector over and over again. Once oil prices have already risen, and the Canadian dollar has strengthened against the USD there is a stampede of US institutional investors buying Canadian oil and gas companies. When US interest in Canadian companies peaked, I would sell the sector outright. Whenever confronted by a complete lack of foreign investor interest, I would buy. We are once again in the ‘buy’ zone.

Anecdotally, there are other contrarian indicators that inspire confidence that the time is ripe. Consider this headline from a Canadian national newspaper (the Globe & Mail, June 12, 2020):

Don’t be too quick to buy TSX energy stocks.

When the press is sufficiently negative, the sellers have sold and tide is about to turn. Another contrarian indicator that is unique to Canada is the wholesale firing of energy investment analysts. Here’s another headline (also from the Globe & Mail, June 11th, 2020) announcing a move by one of Canada’s leading independent investment dealers.

A lesson I learned over many years as a portfolio manager a resource-based economy is that when things can’t get any worse, they soon get better.

Disclosure: I am/we are long SU. I wrote this article myself, and it expresses my own opinions. I am not receiving compensation for it (other than from Seeking Alpha). I have no business relationship with any company whose stock is mentioned in this article.